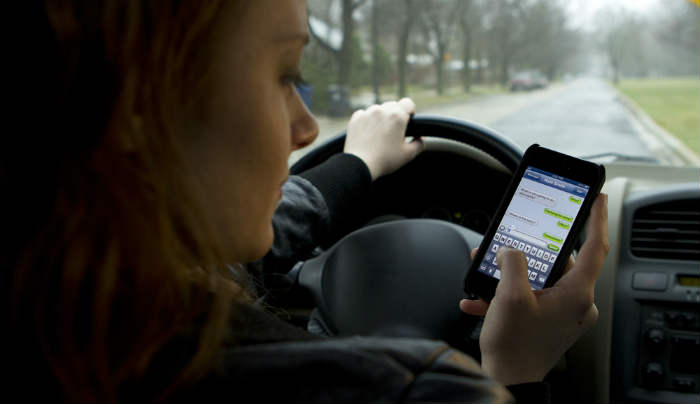 After several decades of declining traffic accidents on U.S. roadways, there was a sudden 14.4 percent surge in traffic-related fatalities over the past two years. Authorities report that there were 100 vehicle deaths every day in 2016 — a painful warning that something is very wrong on the streets and highways in America.

The increase in fatal accidents does not seem to be caused by more speeding or an increase in drinking and driving. Instead, the worsening death rate seems to be a symptom of a growing societal problem: the rise in the use of smartphones while driving.

Accidents Caused by Cell Phone Use

According to an article in Bloomberg, three major factors support the theory that the increase in fatalities can be linked to smartphone use. First, the number of people in the United States who own an iPhone, Android, or other brands of smartphone increased from 75 percent to 81 percent from 2014 to 2016. With a majority of the population carrying a device that has easy access to mobile web browsing, social media apps, and games, it is evident that our obsession with using our phones does not stop when we turn the key in our car’s ignition.

Second, quite a bit has changed over the past decade when it comes to how we use our phones. Once they were a used primarily to make calls, and the method of communication was either to hold the device to your ear or find a hands-free way of talking to the other person. Now, instead of calling others, many people prefer to text, send photos, or communicate through social media apps. When done in the car, these activities are arguably much more distracting than simply talking on the phone, and may be a very significant factor in the number of fatal and serious injury collisions in recent years.

Third, there was a noticeable increase in the types of victims of these fatal accidents. When looking at the numbers, motorcyclists, bicyclists, and pedestrians accounted for most of the increase in fatalities. In the past two years alone, there was a 22% increase in pedestrian fatalities, for a total of 5,987 individuals killed while crossing the street, walking along sidewalks, or at intersections. It is evident that the increase in collisions with harder-to-see vehicles and pedestrians on the road indicates a higher level of distraction on the part of the drivers responsible for the crash.

Further complicating the issue is the fact that it is difficult to track the number of accidents directly caused by cell phone use while driving. Unless the driver admits to using their phone while driving, law enforcement often cannot determine or report the exact cause of the accident. This means that the number of serious injuries and fatalities caused by cell phone use in the vehicle may be much higher than currently estimated.

A study by the San Francisco-based company ZenDrive, Inc. showed that among the 3 million subjects in the study, people used their cell phones on 88 percent of their trips. This is a staggering amount, and the number may have been higher, since the study didn’t account for phones that were in a fixed position, like a dashboard mount.

For people who have been seriously injured in an accident or have lost a loved one due to a distracted driver, rising statistics offer no consolation. There is no reason for a text message, a photo, or a social media post to cost anyone their health or their life. It is just not worth the risk, but too many people feel the need for constant connectivity and fail to put their phones away while driving.

Legal Help for Victims of Distracted Driving in South Carolina

If you or a loved one has been injured in a crash or if you have lost someone you love to the negligent actions of a distracted driver, you can seek justice. A driver who is using their phone behind the wheel may be breaching their duty to take proper care to avoid injuring others on the road, and they may be held liable for injuries or death they cause if they are involved in an accident.

Drivers who choose to text, browse the web, play games, or view and post to social media while behind the wheel are putting other drivers, passengers, bicyclists, and pedestrians at serious risk. The consequences of a collision can be severe, life-altering injuries, or even death. In the event of a distracted driving crash, injured parties and their families have the right to take legal action against the person responsible through a personal injury lawsuit.

Since 1969, the attorneys of Jebaily Law Firm have been helping people who have been hurt in South Carolina, and we are prepared to help you as well. We are one of South Carolina’s most established and well-respected legal practices, and we pride ourselves on protecting the people of our state from the reckless and negligent actions of others.

When it comes to distracted driving, we have no tolerance for those who put others at risk on the road, and we will fight tenaciously on your behalf to hold them accountable for their actions. We will fight to make things right for you and your family and will work hard to make sure that this doesn’t happen to someone else.

If you need the help of an experienced distracted driving accident lawyer, don’t hesitate to contact us today. We are prepared to discuss the details of your case and will work with you to help you rebuild your life after a serious accident. Contact us by phone or online to schedule a free consultation with an experienced South Carolina trial lawyer at Jebaily Law Firm today.