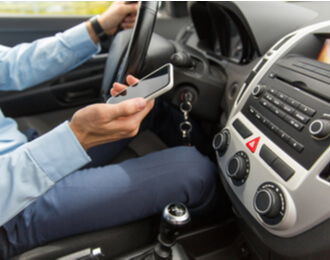 Distracted driving occurs when drivers take their attention off the safe operation of their motor vehicle. It has become a major cause of car accidents in Florence, South Carolina, and across the country. This is due, in part, to the rising use of cell phones and other electronic communication devices while driving.

Too many people – especially teens – believe they can “multitask” while on the road. In reality, they cannot.

In fact, 16 percent of all motor vehicle crashes reported to police were considered to be caused – at least in part – by a distracted driver, the NHTSA states.

If you have been seriously injured or lost a loved one in a car crash in Florence or surrounding areas, you deserve to have a thorough investigation of your case. This investigation may uncover that distracted driving contributed to the losses you have suffered.

The Jebaily Law Firm can investigate your accident and help you to pursue just compensation for your medical expenses, lost income, pain and suffering, and more. Simply call or connect with us online today to get started.

What is Distracted Driving and Texting and Driving?

Texting and driving and other cell phone use get most of the attention about distracted driving. This is because of the particular danger this type of car accident causes.

Engaging in the visual-manual tasks associated with using hand-held phones and other portable devices – for example, reaching for a phone, dialing, or texting – triples the risk of getting into a crash, studies show. For this reason, whether a driver used a cell phone to talk or text before crashing into you should be carefully investigated in your case.

The Problem of Teens and Distracted Driving

Distracted driving among novice teen drivers is of particular concern. The results of a AAA Foundation for Traffic Safety study, which was published in 2015, show there is a good reason for this concern.

The study used in-vehicle cameras to capture teen drivers when “triggering events” such as hard-braking occurred. Distracted driving factored into 58 percent of the crashes analyzed in the study, including 89 percent of road-departure crashes and 76 percent of rear-end collisions.

According to the researchers, the study’s results showed that distracted driving among teens may actually be more prevalent than previously imagined. For instance, the NHTSA had earlier estimated that distraction plays a role in only 14 percent of teen car accidents.

The most common types of teen distracted driving that researchers observed in crashes were:

Unfortunately, parents often are not the best role models when it comes to distracted driving. In a survey published in 2012, 91 percent of teens said they observed their parents talking on a cell phone while driving, while 59 percent saw a parent texting and driving.

Why is Distracted Driving Negligence?

At least one form of distracted driving can be considered negligent as a matter of law in South Carolina. In our state, it is illegal to text and drive. Texting is allowed only when a driver is stopped, parked, or “summoning emergency assistance.” This law reflects the fact that texting while behind the wheel is dangerous and a public safety threat.

Allowing other distractions to get in the way of safe driving can also be considered negligence if they are shown to have caused a car accident.

To be successful, a personal injury claim based on a distracted driving accident would have to demonstrate that:

Compensation awarded in a South Carolina personal injury case is based, in part, on the principle of “comparative negligence.” Under this doctrine, a jury must consider the relative fault of each party in an accident before awarding compensation to the plaintiff in a claim.

So, if you were partially to blame for a distracted driving accident, your compensation would be reduced according to the amount of fault you bear. As long as a defendant’s negligence exceeds your negligence, however, the defendant could be held liable for your losses.

How Our Distracted Driving Accident Lawyers Can Seek Compensation for You

The Jebaily Law Firm investigates distracted driving accidents on behalf of injured accident victims to determine whether liability can be shown. We also carefully calculate the extent of a victim’s compensable physical, emotional, and financial harm.

In addition to the police report after an accident, which may cite driver distraction, our investigation could include collecting evidence such as:

In addition to compiling evidence about the crash, we consult with medical and financial experts to determine the full costs of our client’s losses.

When you work with Jebaily Law Firm, you can focus on your recovery while we focus on your case. We will handle the investigation of your accident, deal with insurance companies and aggressively seek a settlement or verdict that will justly compensate you for your losses.

If you have been injured in an auto accident in Florence or elsewhere in South Carolina that may have been caused by distracted driving, contact us today to get started on your case. Our consultations are always free, timely, and confidential.