Lesson No. 1: Never Text While Driving 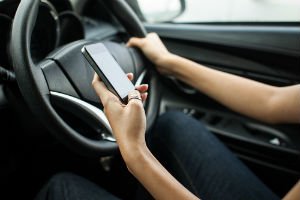 As high school students throughout the Pee Dee return to school, the personal injury lawyers of Jebaily Law Firm urge them to never text while driving and never allow other distractions to expose them to the risks of serious car accidents.

Our firm is highly concerned about the epidemic of distracted driving among teenagers, and we are committed to creating awareness of this dangerous conduct and the harm it can cause.

As a speaker on behalf of EndDD.org – a national organization that is dedicated to raising awareness about the risks of distracted driving – attorney George D. Jebaily often gives presentations to local schools.

His goal – and our firm’s goal – is to help teens in Florence, Myrtle Beach and throughout South Carolina understand the very real dangers that arise when they choose to use their phone while driving.

The start of the school year, we believe, is an ideal time to bring attention to those dangers. A new school year can bring a new commitment to driving safe.

One of the best studies of teen distracted driving to come out in many years was issued in the spring by the AAA Foundation for Traffic Safety.

The study involved the analysis of video footage of teen drivers that was captured with in-vehicle cameras. The cameras caught the actions of teens in the seconds leading up to a crash (none of which, fortunately, were fatal).

One of the leading types of distraction identified in the study was the use of a cell phone for talking or texting. This conduct factored into 12 percent of the accidents.

Researchers capturing teen drivers on camera found that teen drivers who were using a phone to make a call or text had their eyes off the road for 4.1 out of the 6 seconds just before impact.

We believe this study provides solid, tangible evidence of just how dangerous texting while driving can be. Teens can view the video footage themselves to see what happens when they use a cell phone behind the wheel.

Ways Teens Can Break the Habit of Texting While Driving

Texting while driving has been banned in South Carolina since June 2014. Complying with the law should be motivation enough for teen drivers to put down their phones. We suggest that local teens:

The reality is that texting while driving is a habit – one that may be hard to break when one is so used to using electronic devices and multitasking. However, a new school year brings a change in schedules for teens. It could be the perfect time to develop new, safe habits as well.