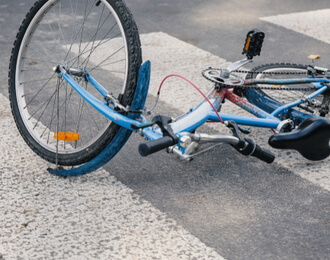 If you suffered severe injuries or your loved one was killed in a bike crash in the greater Florence, South Carolina area, the bicycle accident attorneys of Jebaily Law Firm are ready to stand up for your rights. We know that bike accidents can result in devastating injuries, and the cyclist is almost always the one who suffers the most harm.

If your injuries were caused by a reckless or negligent driver, we are prepared to help you take strong, decisive action to seek compensation for all your losses. You should not be forced to pay for expensive medical bills, lost wages, replacement of your damaged property, and other expenses that you incurred in an accident that was not your fault.

With the help of one of our skilled bike accident lawyers, you could hold the negligent party accountable and pursue the compensation that you are owed. Jebaily Law Firm has been fighting for injury victims in Florence and all over South Carolina for Over 50 Years.

Causes of Bike Accidents in Florence

Bicycle crashes can stem from many different causes, but many of the most serious accidents involve collisions with motor vehicles. In many cases, negligence on the part of a driver is to blame.

Common causes of bicycle accidents include:

Cars are not always involved in bike accidents, though. Some crashes are caused by mechanical defects in the bicycle itself or issues with the roadway. Though insurance companies may attempt to blame the bicyclist themselves for their injuries in these situations, a lawyer can identify the exact cause and work to hold the responsible party accountable.

Types of Injuries in Bike Accidents

South Carolina does not require cyclists to wear helmets by law. However, wearing a helmet could prevent serious head injury in the event of a crash.

Even when a person does wear a helmet, cyclists still could sustain severe harm if they are involved in a crash. Some commonly reported injuries that cyclists suffer include:

Some bicyclists may sustain fatal injuries. Family members of bicyclists killed by another party’s negligence may be able to file wrongful death actions against the negligent party or parties.

Under South Carolina Code § 56-5-3420, a bicyclist has all of the rights and is subject to all of the duties applicable to the driver of a motor vehicle. Drivers are required to pass bicycles with caution and provide a minimum of three feet distance while passing.

Bicyclists must use bicycle lanes when streets have them, and drivers cannot block bike lanes. When a street does not have a bike lane, a bicyclist must ride as far to the right as possible.

South Carolina Code § 56-5-3445 makes it a misdemeanor to taunt, harass, or maliciously throw an object at or in the direction of a bicyclist. A conviction is punishable by a fine of at least $250 and/or up to 30 days in jail.

What to Do Following a Bike Accident

The first thing any person should do after being involved in a bicycle crash is to seek immediate medical care. Even if you don’t think at first that you were hurt, it is still wise to go to a hospital for many reasons.

First, you want to be sure that you did not suffer an injury that might involve delayed symptoms, like a head injury or internal injuries. Some very serious injuries do not show immediate symptoms, but can result in major complications if left untreated.

Additionally, it is beneficial later on to have a medical record created as soon as possible after an accident, so you can show that your injuries were the direct cause of your accident and that they have been properly treated.

You should always contact law enforcement and make sure they file a police report. You should not believe a driver who promises to take care of you if you agree not to involve the police.

Try to take as many pictures as you can of everything that was involved in the scene of your accident. Get photographs of the vehicles and people involved as well as other contributing factors. Take pictures from different angles and distances. If anybody else saw your accident, you will want to collect their names and phone numbers in case they can be possible witnesses. When you are unable to take these steps yourself, ask a friend, family member, or other trusted person to do this for you.

Do not discuss your accident with anybody, including friends, family, and especially insurance companies, until you have legal representation. This includes posting on social media about the accident. Contact a skilled lawyer as soon as possible.

The negligent driver’s insurance company will usually be responsible for covering the cyclist’s medical bills, lost wages, and other damages. Many insurers attempt to deny liability by claiming that bicyclists were at fault for their crashes.

In cases that involve significant damages, a driver may not have adequate automobile insurance limits, or they might not have had any insurance at all. A victim could be able to obtain compensation through their own automobile insurance policy if they have uninsured motorist (UM) or underinsured motorist (UIM) coverage. UM/UIM benefits may be available as well when the child of a policyholder is hurt in a bike crash.

Do I Need an Attorney After a Bike Accident?

Did you sustain severe injuries or was your loved one killed in a bike accident in the greater Florence area? Turn to an attorney who understands bike laws in South Carolina. Our firm has a track record of successfully handling cases like yours.

Jebaily Law Firm  has obtained millions of dollars in verdicts and settlements for our clients. We can provide a complete evaluation of your case. Call us or contact us online to schedule a free consultation.