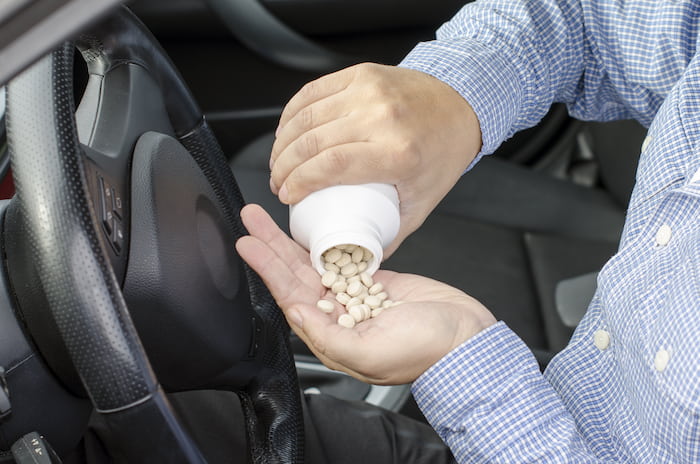 More than 48 percent of Americans take at least one prescription drug and millions more regularly use over-the-counter (OTC) medications to treat a wide variety of conditions. While most medications have few side effects and do not impair the ability to drive, some could affect driving abilities for a few to several hours after use.

Before getting behind the wheel, it’s vital to know which OTC and prescription medicines are safe to take before driving – and which ones could cause significant impairment.

What Kinds of Medicines are Dangerous for Driving?

According to the Food and Drug Administration (FDA), the following types of medicines could make it dangerous for you to drive:

The FDA stresses that certain prescription and OTC sleep medications can still have side effects in the hours or even a day after taking the drug, especially extended-release formulas. You should discuss the potential side effects of any drowsiness-inducing drugs with your doctor or pharmacist before you drive.

Dangers of Driving on Dangerous Medicines

Many prescription and OTC medications have notable side effects that could make it unsafe for you to get behind the wheel. Common side effects of these dangerous medicines include:

Can I Get a DUI for Driving with My Prescription?

South Carolina’s impaired driving laws prohibit motorists from operating motor vehicles while they are “materially and appreciably impaired” by any substance – including a prescription or OTC medication. Just because the drug is legal or prescribed by a doctor doesn’t mean it is safe to take before driving.

Penalties for driving under the influence (DUI) could include hefty fines, driver’s license suspensions, and even possible jail time.

A driver who is impaired by prescription medication or an OTC drug could be found liable for a car crash caused by their impairment.

Just because a person takes a prescription or OTC drug legally does not mean they have the right to drive while taking the medication. If someone operates a vehicle after taking medication that causes impairment, they can be held legally accountable for their actions, including any harm or damage they might cause in a car accident.

If you were involved in a car crash involving a driver who took prescription or over-the-counter medication, Jebaily Law Firm wants to help. Our award-winning trial lawyers have more than 100 years of combined legal experience. We are prepared to fight aggressively to help you seek the compensation you’re owed.

Contact us now for a free, confidential case review to learn more.