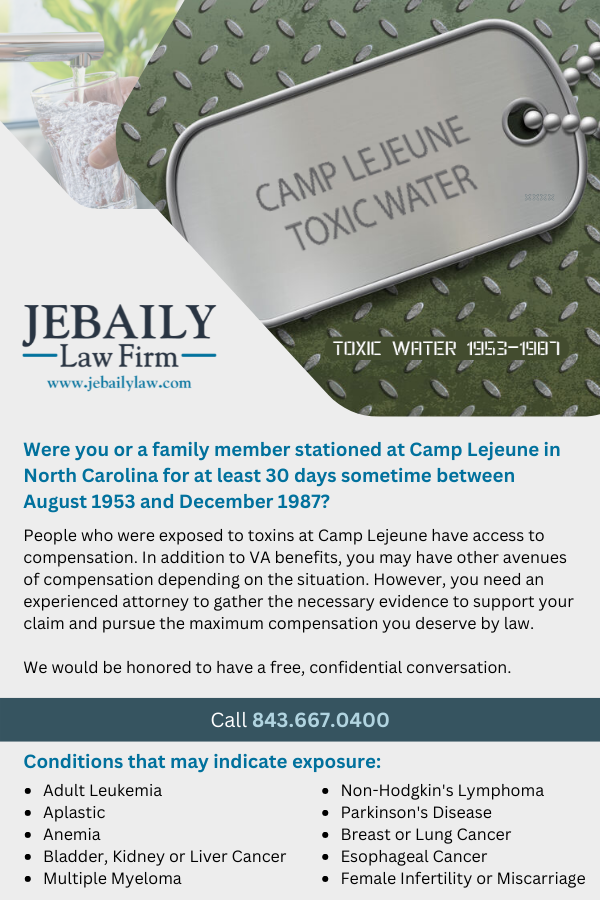 Many military personnel and their families who lived or worked at Marine Corps Base Camp Lejeune and Marine Corps Air Station New River in North Carolina between 1953 and 1987 were exposed to drinking water contaminated by solvents. This exposure is associated with a higher risk for various types of cancer and other serious health conditions.

If you lived or worked on base during the affected time frame and have developed one of the qualifying medical conditions, you may be eligible for healthcare coverage as well as compensation for your illness.

The attorneys at Jebaily Law Firm can help you understand your legal options and pursue the compensation you deserve. Contact us today for a free consultation.

Between 1953 and 1987, contaminants from multiple sources entered the water supply at Camp Lejeune. According to the Centers for Disease Control and Prevention (CDC), the primary causes included poor waste disposal practices from a nearby dry-cleaning business, leaking underground storage tanks, and industrial spills.

The most contaminated wells were shut down in 1985, but this was too late for the thousands of veterans and family members who had already been exposed to dangerous contaminants.

The CDC reports there is enough evidence to conclude that the chemicals found in the water at Camp Lejeune directly cause several types of cancer as well as cardiac defects, reproductive and birth problems, and other conditions.

At this time, you may be eligible for medical coverage for the following conditions:

Additional research is needed to determine if other types of cancer and other diseases are directly related to water contamination at Camp Lejeune.

The health issues caused by exposure to this contaminated water depend primarily on how long a person was exposed, the quantities of chemicals they ingested, and whether they were exposed during infancy or childhood, during pregnancy, or as an adult. Not everyone will develop health problems after exposure to the water at Camp Lejeune.

What Chemicals Were in the Water at Camp Lejeune?

The following four chemicals were found in the water at Camp Lejeune:

Other compounds were also found in the water supply, such as trans-1,2-dichloroethylene (DCE), that could have potential negative health effects. However, at this time, these four have been the main cause for alarm.

Do You Have a Claim Against Camp Lejeune?

In order to file a claim against the government over Camp Lejeune water contamination, you will need to prove that you lived on base for at least 30 days between August 1953 through December 1987, and that you have been diagnosed with any of the listed presumptive conditions, and that you have paid healthcare costs to treat those conditions. If you are a spouse or dependent of a veteran who served at Camp Lejeune, you should also show proof of your relationships, such as a marriage license or birth certificate.

Exposure to contaminated drinking water can cause acute conditions, such as nausea, dizziness, vomiting, headaches, confusion, or tremors. If you experienced these symptoms while living at Camp Lejeune, you likely did not realize what was causing them, and you may not remember many details about what you experienced. Documenting these conditions may be helpful in building a strong case, but it is not a required element for receiving compensation.

Potential Compensation for Victims of Contaminated Water at Camp Lejeune

Veterans and family members who have suffered any of the listed health problems after living at Camp Lejeune may be eligible for reimbursement of their healthcare expenses for treating the condition. Veterans may also be eligible for monthly disability payments. The amount of money you may be owed each month depends on the severity of your health problems, which will be used to calculate your disability rating.

Although it is possible to file a claim on your own for an illness caused by the water contamination at Camp Lejeune, you are at greater risk of making a mistake that leads to your claim being denied. Hiring an attorney from Jebaily Law Firm at the beginning can simplify the process and increase your chances of recovering fair compensation.

Our attorneys can help you by:

Contact Our South Carolina Lawyers About Your Camp Lejeune Claim

A diagnosis of cancer or another severe illness can be life-altering, but you might be especially frustrated to learn that it is the result of toxic substances that you were exposed to by the government you served. At Jebaily Law Firm, we will do anything we can to support veterans and their families while seeking the compensation, justice, and accountability they deserve.

Our team has been fighting for justice for the people of South Carolina for over 50 years. We are hardworking, aggressive, and dedicated to our clients. These qualities are why we consistently obtain favorable results for our clients.

Contact us today for a free consultation with a South Carolina Camp Lejeune claim attorney.